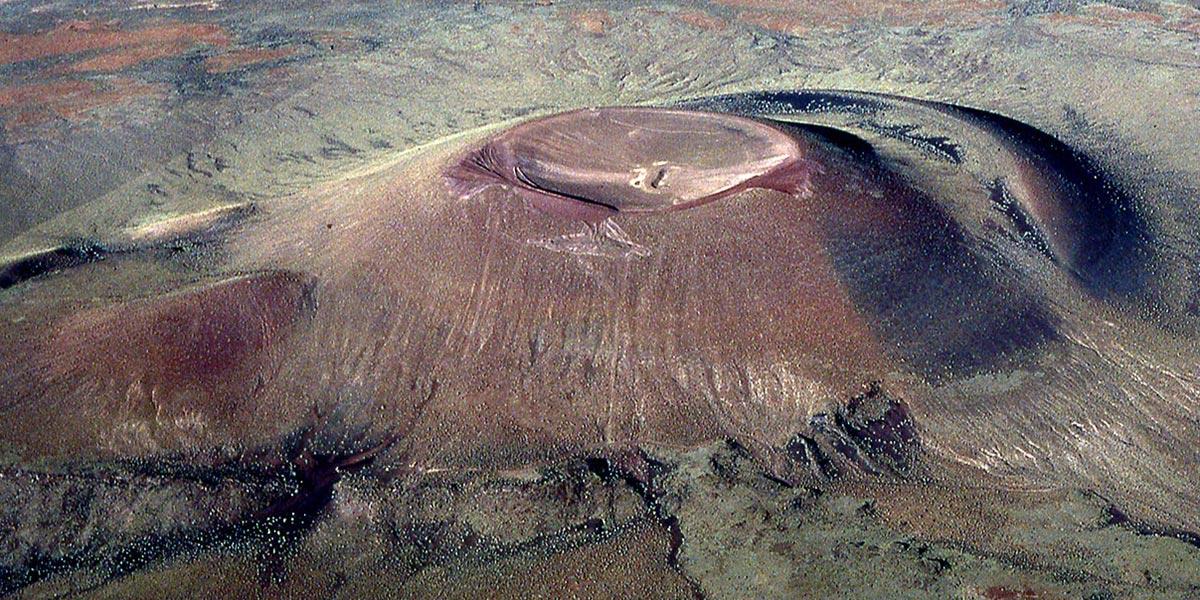 Arizona’s oldest volcanic rocks are 1.8 billion years old. Some of Arizona’s most spectacular geologic features and scenery are volcanic in nature, e.g., Flagstaff’s San Francisco Peaks.  And volcanic rocks and features are  ubiquitous in space and time (FIGURE last 200 myears).

Arizona boasts seven young (Quaternary) volcanic fields; young, that is, by geologic standards. The three youngest fields are the San Francisco, Uinkaret, and Pinacate volcanic fields. The former two reside on the Colorado Plateau of northern Arizona; the Pinacate field is situated on the Arizona-Mexico frontier about 40 miles south-southwest of Ajo, Arizona. The San Francisco field is situated near Flagstaff and was active as recently as 1085 CE, just 932 years ago with the eruption that formed Sunset Crater. The Uinkaret field, perched on the north rim of Grand Canyon, also evinces volcanic activity as recently as about 1,000 years ago.

Cinder cones, ~1000 feet high with a basal diameter of ~3000 feet, are the most common volcanoes of the seven Quaternary fields.  Other major volcanic features that crop out in Arizona, include: lava flows, lava cones, domes, shield volcanoes, caldera structures and massive outflow sheets of pyroclastic deposits, composite or strato-volcanoes, and voluminous pyroclastic tephra (ash, cinders, and bombs) deposits.

Impacts on People, Property, and Infrastructure Arizona’s sobriquet ‘the Copper State’ stems from the large porphyry copper deposits that accompany multiple caldera (super volcanoes) formation events in the Late Mesozoic and Early Cenozoic, about 75 million years to 60 million years ago. Copper derived from these deposits has fueled Arizona’s mining industry, and the Territory and State economy, since the 1870s. (Manganese, lead, zinc, gold and silver are common byproducts of copper mining.) Copper production still contributes more than $5 billion annually to the Arizona economy.

Arizona’s San Francisco volcanic field, which is situated near Flagstaff, Arizona, attracts tourists from the U.S. and abroad. Sunset Crater is a national monument. Volcanic edifices in the San Francisco and Springerville volcanic fields draw hikers in the summers and skiers in the winter. The San Carlos field is renowned for its beautiful crystalline green peridot. Cinders from cinder cones are a source of aggregate and decorative rocks. (The City of Flagstaff spreads cinders on the roads in the aftermath of snow or ice storms.)

There is good reason to anticipate additional eruptions in all three volcanic fields, which will probably result in the formation of a small cinder cone and related lava flows. The chief hazard in that case is from cinder- and ash-fall downwind of the vent and from lava flows proximal to the vent. Larger volcanic vents, such as volcanic domes, stratovolcanoes (e.g., San Francisco Peaks), and calderas represent a substantially greater geologic hazard, but the likelihood of such eruptions in Arizona is very small.

Geologic hazards of active volcanic fields are legion and include:

Geoscience at work for Arizona

Economic geology – the mining of minerals – and volcanic products or by-products frequently go hand-in-hand. Here in Arizona, caldera formation and post-caldera hydrothermal systems are responsible for the large-volume porphyry copper deposits that fueled early growth in Arizona economy.  Geologic mapping and report by the AZGS and our predecessor agencies, e.g., Arizona Bureau of Mines, contributed greatly to understanding the economic geology of Arizona.

Bulletin 180, 'The Geology and Mineral Resources of Arizona' is a classic example the role the Arizona survey played in identifying and informing Arizonans of mineral resources, ranging from copper, to gold, silver and manganese, to energy resources, such as oil and gas, coal, and uranium, to industrial aggregate deposits, clays and limestone. The 467-page tome goes mineral commodity by commodity and provides maps showing the distribution of each commodity. An important complement to Bulletin 180 is Bulletin 194, Metallic Mineral Districts and Production in Arizona. AZGS Map-18, which accompanies Bulletin 194, provides the footprints, name and commodities of the more than 300 metallic mining districts in Arizona.

Go to the Viewer